How to Prevent Your Trailer from getting Stolen 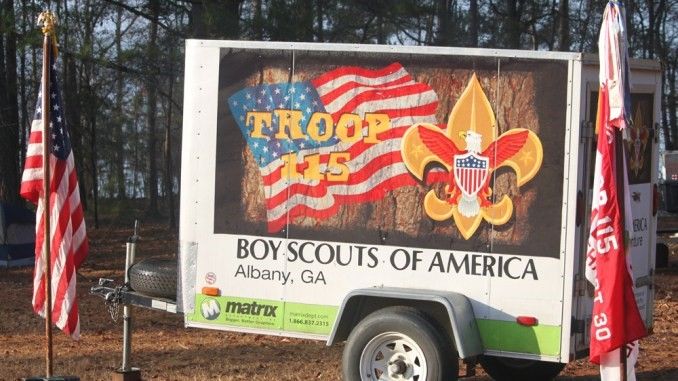 That’s why you should take steps now to safeguard your unit’s trailer and its contents.

Acts of theft don’t get much lower than stealing from a pack, troop or crew. But search Google News for “troop trailer stolen,” and you’ll see it happens all the time.

Here are some ways to ward off potential thieves:

How to keep your troop trailer from getting stolen

Phillip Moore, insurance and risk management specialist at the national BSA headquarters, recommends checking with a boat dealership to buy a device like the ones police officers use on illegally parked cars.

“The wheel lock is a visible deterrent and does not allow the trailer to be moved,” Moore says.

Moore also suggests parking your trailer so that its rear doors butt up against a wall or some other permanent structure. Combining that with a wheel lock will make it much tougher for a thief, he says.

3. Don’t store any gear inside.

It may not be practical for all troops, but commenter Jason P.’s unit keeps all of its gear at a separate location. If thieves discover the trailer is empty, they may leave it alone.

4. Paint the top of your trailer.

Put your unit number on top of the trailer. This way, “if it is stolen it can be identified from the air, where most of those who would steal it would not think to look,” says commenter Kenneth K.

5. Think before you park.

Rather than parking the trailer in a church lot that’s empty many nights, many Scouters said their trailer lives at the home of an adult leader.

If you don’t want to or can’t park at a Scouter’s home or at your meeting site, ask your local police department if they’ll let you store your trailer there.

That’s what commenter Mike L. did.

“As far as I know, that’s a pretty good spot,” he says. “I think everyone should consider it!”

“Nothing is 100 percent safe,” commenter Ken K. reminds us.

So insure your trailer and its contents from theft or damage. It might be money well spent.

A cool design for your trailer can be an important recruiting tool and instill a sense of pride for your troop.

But commenter Cindy P. says those markings also might make it a target.

“Our trailer has no troop identifying markings on the outside,” she says.

Commenter Ted M. disagrees, saying you need distinctive markings if you ever hope to get your trailer back.

“Several years ago our plain white trailer was stolen, and when the cop arrived he asked for a description of it. When he was told it was a plain, white, 6-by-10 trailer, he folded up his notebook and you could just see him mentally closing the case right there,” Ted says. “He said these kinds of trailers get stolen all the time, and that there was something like 10,000 plain, white, 6-by-10 trailers in the seven-country metro area.”

“It may be worthwhile to remove one of the wheels and store it inside if the trailer is not used too often,” says commenter Jim Q.

Unless the thieves bring their own tire and gear, they can’t tow it anywhere.

Commenter Eric S. suggests having the Scouts do this because it’ll teach them how to change a tire.

“It may even satisfy some requirements,” he says. “Also, it will give you a chance to inspect and air up the tires.”

11. Get a GPS tracking device.

Buy a GPS tracker for your trailer, and set up a “digital fence” around its location.

“If it is taken you, and police know exactly where it is,” says commenter Gary M. “If it travels outside the digital fence limits, you get alerted on your cellphone or computer.”

You can never have too many locks, suggests commenter Ron S.

“When we built our troop shed and pad behind our chartered organization, a heavy chain was cemented into the foundation. So, besides being locked to the pad, the trailer doors are secured with heavy duty discus locks and the hitch with a coupler lock.”

This form needs Javascript to display, which your browser doesn't support. Sign up here instead
Close